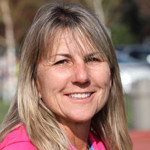 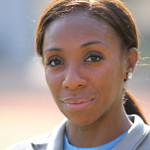 Lashinda Demus
Lashinda Demus is an American hurdler who has been among the elite in the 400 meter hurdles for nearly a decade. She won the World Championships in Daegu, South Korea on September 1, 2011, with her personal best of 52.47, which is currently the women’s 3rd fastest time ever. A mother of five-year-old twin sons, she is sponsored by Nike and coached by her mother Yolanda. Her main goal, following a heart breaking silver medal during the London Games of 2012, is to finally get gold at Rio in 2016. 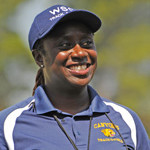 Denean Hill
Denean Elizabeth Howard-Hill won a gold medal at the Los Angeles Olympic Games in 1988 as part of the 4×400 meter relay team. She subsequently won a silver medal in the same event during the next two Olympics. Previously, she had won four state titles for Kennedy High between 1980 and ’82. Currently, she is the assistant track coach at the College of the Canyons in Santa Clarita, California. 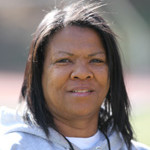 Yolanda Demus
In 2008, Yolanda Demus was somewhat surprised when her daughter Lashinda moved back from South Carolina in order to train with her and focus on “a no-excuses year”. Yolanda had coached Lashinda from age 5 until high school, however, it had been 11 years since they were athlete-coach. “I didn’t know if it would work or how it would go,” said Yolanda, a 51.6 quarter-miler at Cal State-Los Angeles. Her daughter occasionally calls her “Sarge” due to her drill sergeant disposition during practice but the partnership helped Lashinda become a world champion. 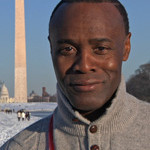 Buddy Lee
An Olympian and World Champion wrestler, Buddy Lee developed a jump rope conditioning system that he has used to train athletes in 25 Olympic sports. He became a motivational speaker, wrote a book and has performed or given workshops in dozens of countries, at schools, at clinics, on TV, in the middle of NBA games as well as during fitness and sports conventions. In 2012, Buddy Lee toured U.S. Army bases presenting his “Get Fit … Be Strong” program.

Stephen Ihli
Originally from Seattle, Washington, Stephen graduated from the University of California Santa Barbara in 1988. He went on to make documentaries about subjects such as the drug laws as well as the counseling program he conducted in Central Juvenile Hall of Los Angeles. He also helped create the Shadow Cards, a psychological tool still used by psychotherapists, artists and healers. In addition, he invents fitness equipment and teaches JumpRopeSprint classes.